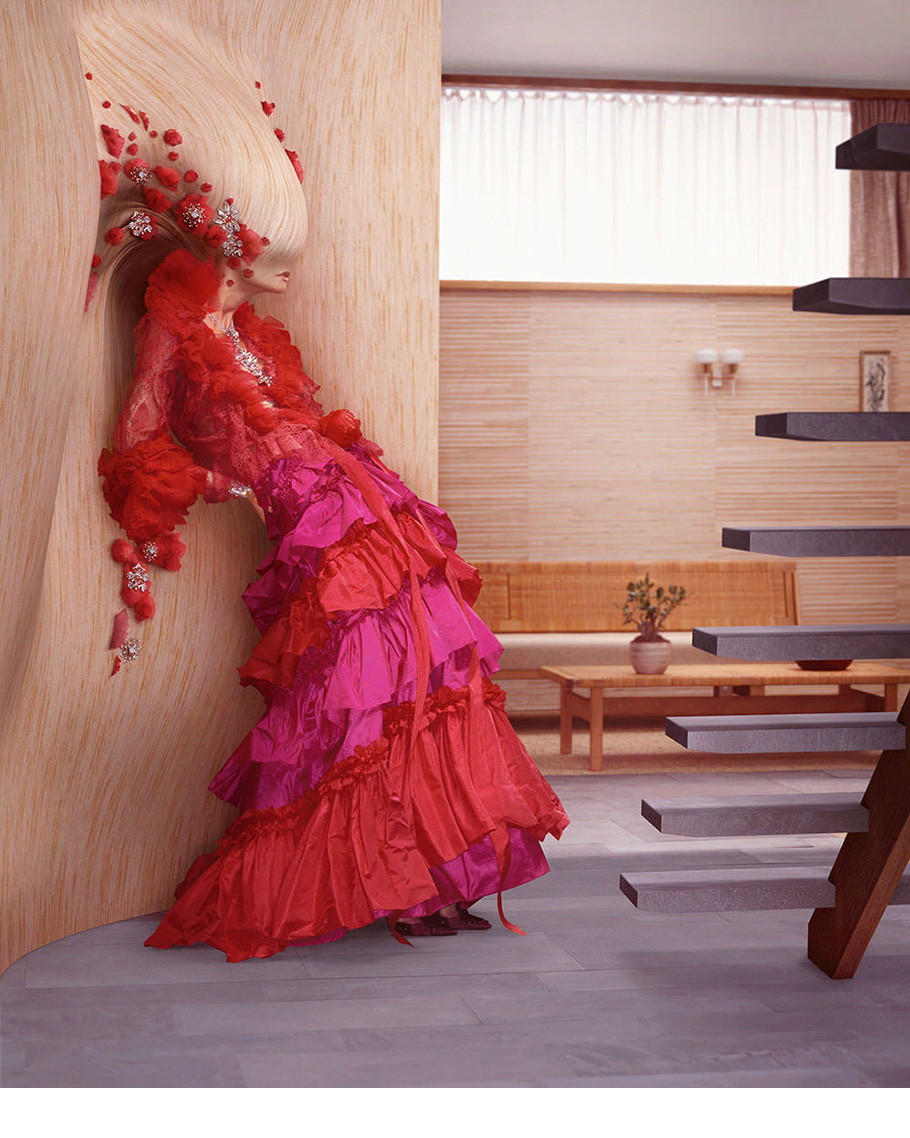 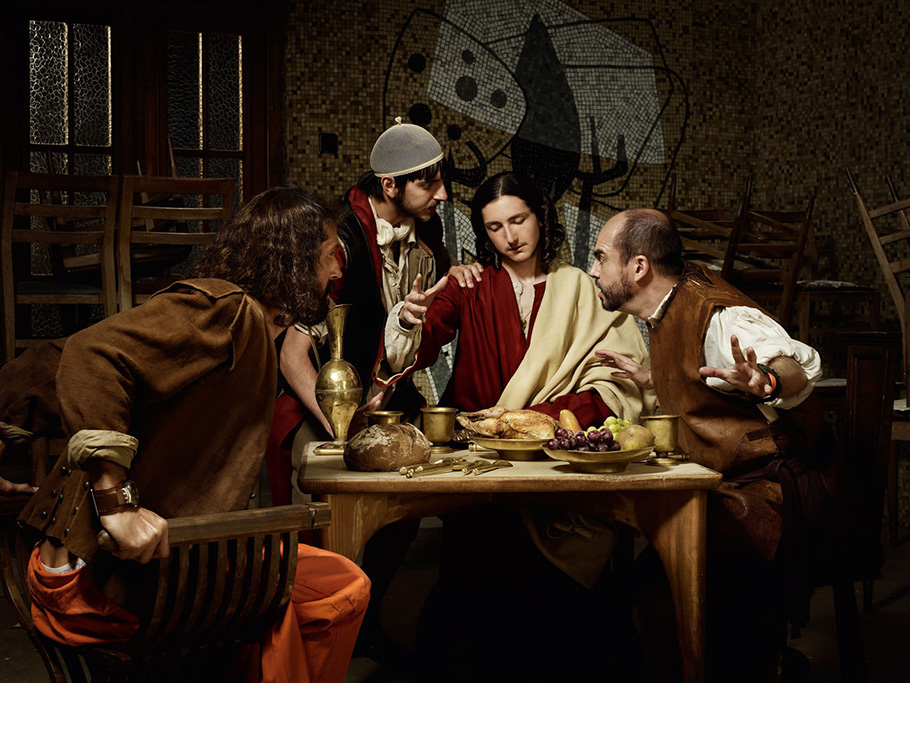 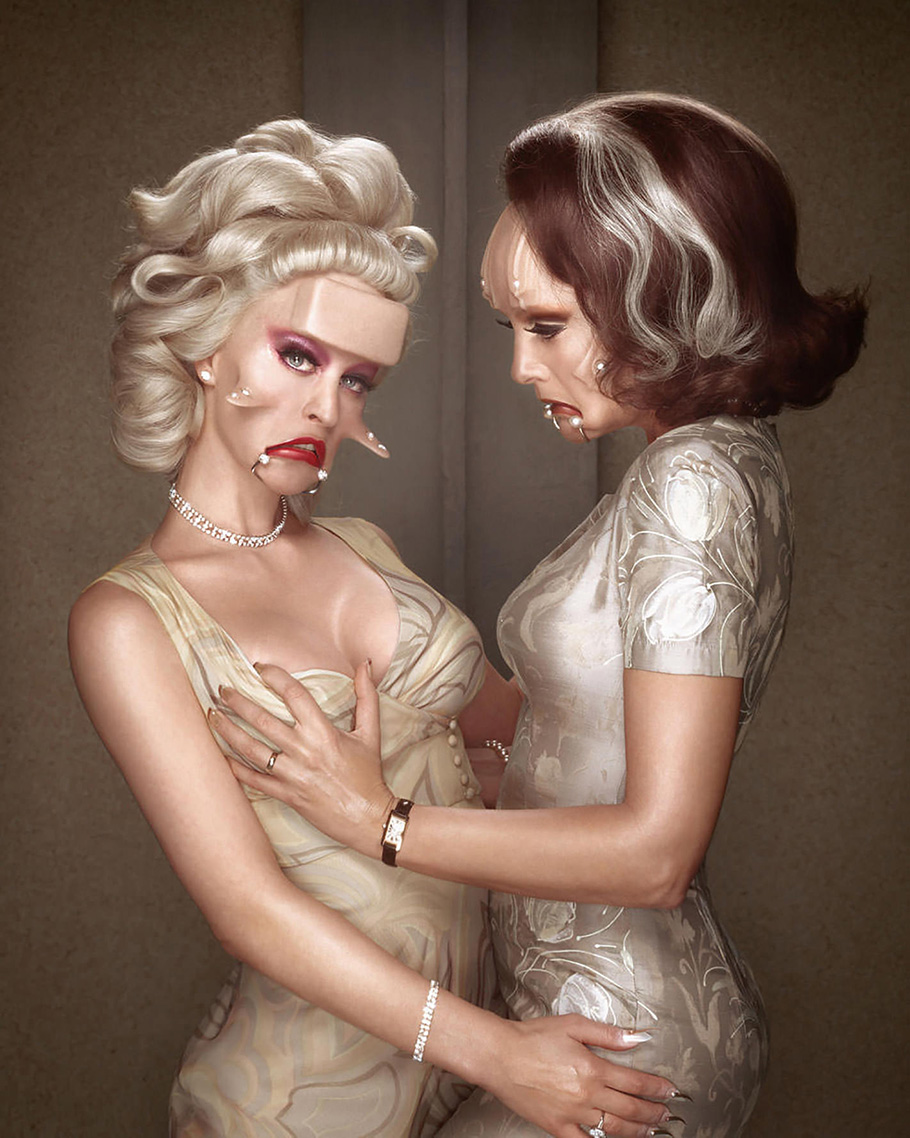 I started out as a photojournalist when there was a lot of unemployment. To get work I volunteered to shoot for various groups. I also assisted a photographer. I learned how to print a kilo or more of paper in a day! He really taught me how to do black and white.

I was not that interested in journalism, and whatever was the subject I was aware that in the back of my mind other things were going on. I bought a Hasselblad, but at first struggled: I had thought, “I have the best camera in the world and my pictures will be the best”, but it was not like that. It is quite a different technique to the 35 mm.

I was lucky in that I met a friend of Robert Mapplethorpe, a choreographer who I was sent to photograph to go with an interview. He collected photographs and had a lot of Mapplethorpe, Richard Avedon, Joel-Peter Witkin. That afternoon he educated me.

So I started to concentrate on studio photography. When I look back at the early work, I can see how I adored Witkin at the time. It took me a few years to find my own signature, but at first you have a learning period and have to steal influences and ideas. People say you have to be original but if you torture yourself too much with that you never make anything. You have to try things.

There is not so much difference between making reportage about a demonstration and making an ad for Nokia. You have rules in each situation, the rules of the magazine or the rules of the advertiser. On an assignment, you have to listen to the person who assigns you. The real difference is between whether you work for clients, or you work freely for yourself as an artist. I always like to do both, and one supports the other. Now for me it is about 40 per cent assignment, 60 per cent my own work. I work a few months for assignment and then I step back a bit and work on my own projects. And this increasingly also helps the studio income with sales of limited edition prints.

In the early nineties I was anti-Photoshop. It changed when I did the project Mature: I had these women who I wanted to give grey hair, and so I had them wear wigs, but I wanted to touch out the underlying hair. A small thing, but it opened my eyes. What particularly attracted me when I started working digitally was that you had good colour management, better than with film. So this allowed me to move from mostly black and white to working with reduced colour. When I first began with the digital I made a series of over-the-top Photoshop images. Nowadays I use it in a more modest way.

I like Lambda digital prints. They are very close to handprinting, but I am not sure how they will age. But that is like modern art – if somebody does a shit in a tin in the 1960s, how do I know it is a work of art that is going to last? Ha! It is like that with modern photographic prints: who really knows if it is going to last 300 years?

When I do my own work it is more or less my diary: it is what interests me at the time. The last few years my work seems less aggressive, exuberant, decadent. I am turning more inwards. Is this because I have turned fifty? That’s OK: it would be strange if I was still in the middle of the dance floor screaming my head off.

As I get more reflective in my images, I find that I get more recognition internationally, particularly in the US and the UK. But before this time – when I created more decadent, emotional, baroque images – the interest came more from Italy and Spain. They are more baroque, emotional; and now they question what I am doing! But I cannot be different from what I am: it has to be what I feel.

But then perhaps I need to make something scandalous again. I am getting too tame.It was interesting how the Fall series came about. I had wanted to end the Grief project, which had got a lot of recognition, but I needed to kill it and not let it drift into kitsch. I was testing, working with this model, and she blinked as I took the picture at the wrong moment. So her eyes were shut and I saw that I had captured this kind of non-emotion; the closed eyes were denying us somehow. I found it interesting. That was the beginning of Fall, a reaction to what had gone before.

And in that work I went on to make the flower still lifes, which were also a kind of therapy. I tried to make something empty, but of course it is not really empty. Whatever you make, there is something for the fascination to work on. These images reminded me that when I was young there were dried flowers in my grandmother’s house, and when you bring back this memory, you bring back the memory of the smell of the dried flowers. That kind of reflection is not entirely comfortable, and I am deliberately playing with that in the photography.

With film and music, an artist can give you a strong emotion. With photography, there is always a layer of non-emotion between you and the viewer – it is not like being touched in the cinema. This is what I am exploring all the time, because I would love to reach beyond the paper and touch you in the throat and affect you. I think it is nearly impossible with a single photograph. I would love to know how to do this. With a group of pictures, combined with little movies, in a one-man exhibition, then it is easier because you can drag people into your world. But what is my world? I am not sure; when I start an idea I do not know where I am going to end. Twenty years ago I could – I had a sense of how I wanted it to end. But these days I follow an idea and don’t know exactly what I want to explain or tell.

The work is open for me too, and I think this is a sign of growing as a person. I am no longer so concerned to convince people; I am not trying to prove something. Nowadays if you don’t like it, that’s a pity for us both, but I am doing my best and that is it. Where I once had images with twenty clowns and lots of confetti, lots of Photoshop, now I might have one woman with just a little tear in her eye, and it says more. You learn this over time. It took a long time for me to discover this.We all have failures. For me, reportage wasn’t my strongest point and that now extends to working with dynamic action photography. I can beat myself up about it, but I have to accept that right now I am not the fashion guy with lots of energy crawling around his models. I would like to go there; I have done some fashion, but I am still practising. And I get some interesting jobs, but at present it is “Erwin Olaf-doing-somethingwith-clothes”, whereas I want to get more inside fashion.

Everybody is snapping away doing reportage, or fake reportage, today. If you publish it in the right order it looks OK in the magazines – at first. But I question whether such work will last a few years. There must be about 3.5 billion photographers in the world right now and they all can have a go at reportage. But to be good you have to really understand the craft: there is a lot of craftsmanship to getting a great image.