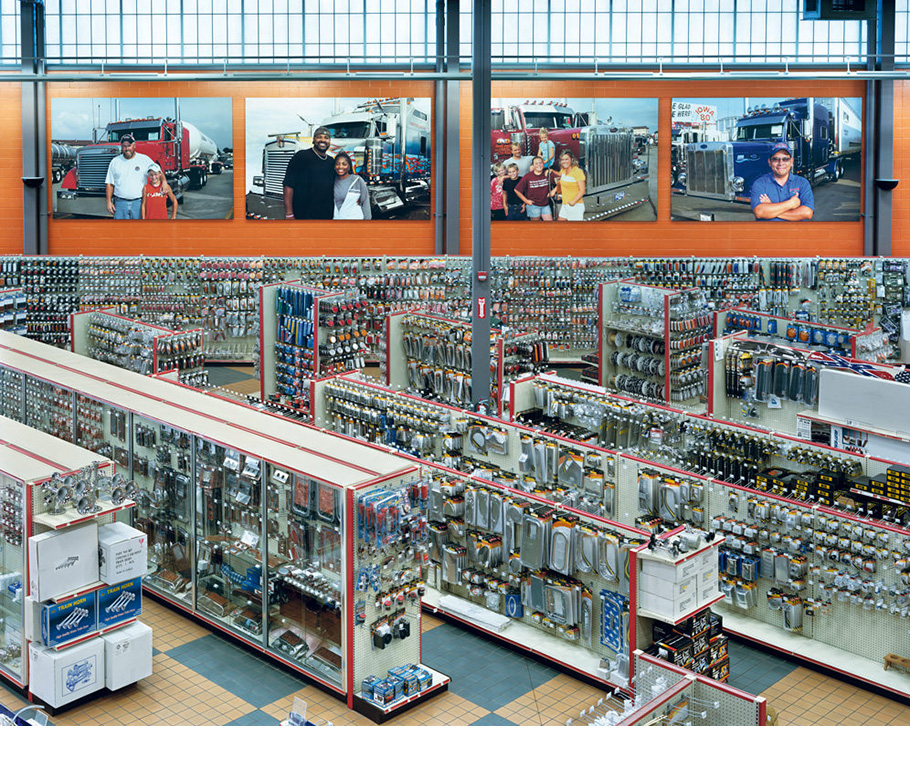 I made my first pictures as a seventeen-year-old student at a traditional New England boarding school. I volunteered to edit the yearbook, and the job led me to my medium by default. I couldn’t round up enough photographers to make the kind of pictures I imagined – informal, environmental portraits versus generic studio shots – so I took a course in photography to be able to make them myself. After the yearbook was finished, I kept making pictures.

When I was twenty, I moved to New York to go to the Cooper Union. In Garry Winogrand’s class, everything I thought I knew about photography and art was called into question. Garry made me unlearn much of what I had been told by other art teachers were the principles of a “good picture”. Most liberating was that he taught me not to worry if I was making art or not.

I started to work in colour, which was a radical, and some thought foolish, move in 1973. Colour photography was not yet a medium for serious photography – it was used almost exclusively for slick advertising and illustration. Within a month of shooting in colour, though, I wanted to do nothing else.

I was formed by a picture-making school in the seventies that believed the world is more interesting than any refashioning of it. Therefore, a photographer should not tamper with the world he was photographing.

As I developed, I learned that a photograph is other than the thing itself photographed, and this freed me to think about how I could use photography to fictional effect, even while my pictures were drawn from the real world. In the eighties, I made films in tandem with photography. As a cinematographer and set designer, I had to move objects and people around in the frame, or get rid of something I didn’t like. It took time to figure out how far I’d manoeuvre a photograph. I feared killing a picture with intent. Now I don’t have that fear. I’ve learned to balance my intention with the chance find.

As a young photographer, I made weekly visits to the study room of the Museum of Modern Art photography department. It was a thrill to look at original prints and talk about them with John Szarkowski, who was at his pinnacle of curatorial stewardship. The language that Szarkowski created for the reading of photographs changed my understanding of what a photograph was and could do.

In the fall of 1974, I spent three months making pictures in Los Angeles, a city that I knew next to nothing about. Often a day’s work would yield no more than long drives and clues to future drives. On occasion, I would come across a situation of extraordinary photographic possibility. At an autumn harvest fair in the hills north of Los Angeles, I found four blond archetypal California girls fondling a snake, while a baby slept on the hay, seemingly abandoned, a few yards away. The photograph frames the relationship between these girls, their snake and the baby in the hay. I saw in this picture – and others I made at that time – a way to draw a theatrical tableau, or mise-en-scène, using real people in the public landscape.

A good friend of mine is a writer who spends his days and nights writing, reading and thinking in the library of his Greenwich Village townhouse. He has always envied my life as a photographer who works out in the world. Though I deeply admire his work, I cannot imagine trading places with him. Photography remains a tool with which I form and sharpen my response to the world around me. Anything and everything is photographable in an infinite number of ways. That excites me.

Shifts in technology have impacted my working process, and therefore my work itself, from early on. I began with a 35 mm camera and now I use an 8x10. My camera is very old- fashioned, but I have embraced high-technology printmaking. For the last few years, I have scanned my negatives and then modulated them in Photoshop. I resisted digital printing for a long time, because I didn’t like most of the digital art I saw: the prints either had a slick, overly perfected, non- photographic quality, or else they exposed pixels to my distraction. But as good optical paper was harder to find, I thought I better walk into the future before it slams into me. It took me a couple of years, working with a master printer, but I am a convert. I love traditional prints, where the feel of the printer’s hand is in them, but I’m not nostalgic. The meeting of analogue and digital technologies in my work intrigues me.

Since the early nineties, I have worked on long projects with a central theme. Each has taken about five years to complete. I just finished a trilogy begun in 1995: The City; Family Business; American Power. It is a photographic excavation of my adopted home, my home town and my country. I have never I wanted to make work that is directly about me; rather, I concentrate on a specific place or idea that matters a great deal to me. The City (pictures of NYC) addressed the tension between private and public life; the theme of Family Business was my father’s success and failure; and in American Power, I explored the complex meaning of power in the US. In all three projects, I am fascinated by the meaning and look of American-ness.

I establish rules at the start of each project, in order not to stray too far from my primary theme. With American Power, I made a rule that everything I photographed had to relate somehow to energy production or consumption. But I allow myself to break, or at least bend, those rules so as to subvert my own intentions and let the work breathe; let it hold multiple and mysterious dimensions. Surprise is important to me: my own, as I photograph; and the viewer’s, as he or she looks at my pictures.

An important part of my process is collaboration. The dialogue I have with my wife and editor, Susan Bell, has been essential to me as an artist. Our intense conversations about work, and our editing sessions, produce demanding and useful questions about what I have done and want to do.

Since I started photographing, I have been almost continually motivated to go out and make pictures. But I am more patient than I used to be. I can go out for an entire day, set up my camera several times, and never make a frame, because, in the end, I did not think there was a picture to be made.

Family Business, about my father and home town, has been my most gratifying project. It’s about my father’s life, and by extension, about all men of his generation guided by the “American dream”, only to be left behind by corporate takeovers and high technology. The book contains mixed media – photographs, film stills and storyboards, interview excerpts, archival pictures and an essay I wrote. It is miraculous that the book wound up coherent. I am glad that it stretches the definition of a photography book. I have been a book lover and maker since the eighties. I edit my books carefully to give them a visual, rhythmic arc. Sequencing is an art in itself: you want readers to be startled when they turn the page, but also increasingly clear about the book’s premise and direction.

I had numerous satisfactions – artistic and personal – from Family Business. Having watched me work on this project, my father understood for the first time the hard labour and long hours involved in making art. Also, he had gone through hell and felt vindicated by my book.

One project can lead naturally into the next, without my understanding the connection until much later. Now I see that American Power took one idea in Family Business and developed it. American Power questions the very idea of the American dream that defined my father’s life in Family Business. What did we, as a country, want to become? American society was predicated on the idea of having no limits. Manifest Destiny. But when I made American Power, I didn’t begin my day with a political agenda. Climate change was not on my mind, in a conscious manner, when I made pictures. Formal questions, like how to frame the landscape, were much more compelling to me then. I only became aware of the political aspects of the pictures later, when I studied them.

Photography is a lot about failure – in failure lie the ideas and risks that lead to new ground. I fail often while making a body of work. I may have failed to resolve an image formally or technically. Some pictures don’t work, but show an intimation of success. I study them for what they might have been if I had shot them differently.

I never pick my projects; my projects inevitably pick me. I don’t mean that glibly. I’ve learned to listen to what moves and troubles me, and that leads me to where I have to go next. I have been through hellish periods, where I don’t know what’s to follow after finishing a body of work – a kind of post-partum. But I’ve learned that it is helpful to remain patient and open, and it’s necessary to relax and pursue interests beyond photography during these periods.

What I want to photograph changes with time. The stakes are higher for me both humanly and artistically as I get older. I have a family now and a more acute consciousness of the world as a welcoming or non-welcoming place for my child. I have thirty-five years of photographing behind me, and I’m more demanding with myself than ever – I want those years of experience to support my more mature engagement with making art.

I try to acknowledge the complexity of any subject. Clarity is the structural core of my best work. Yet achieving clarity does not mean that a picture will have a single message or meaning. Clarity is what draws viewers in, and compels them to bring their own set of associations and history to the experience of the work. Be it photography, film, poetry or sculpture, if it is masterful there is never only one single meaning to be drawn from it.