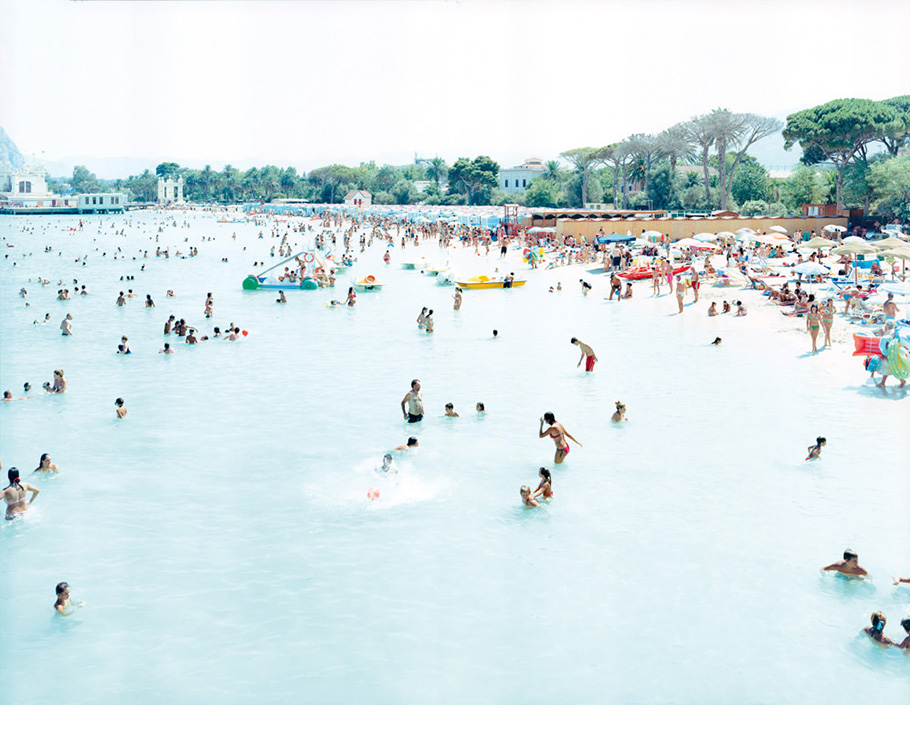 I had two 4x5 cameras that I used for jobs and they were stolen from a car in Milan when I went for lunch. All they left was the big bag with the 8x10. I hadn’t used it then, but it was like a sign of destiny. The 8x10 is a terrible camera to use – nothing is really the focus, but it was what I had.

Anyway, I thought I would build a high tripod, around five metres high, so that I could focus by tilting the front. It was a purely technical thing. And when the tripod was ready, Berlusconi had just won the election in 1994 and I was living near a beach and I wanted to go to the beach and look at these people who had voted for Berlusconi, look at them in the face. I was puzzled and intrigued. Things were changing. So I had this idea of taking the pictures from the sea, looking at the people. Most pictures of beaches are taken from the back, so you see the back of the people plus the sea; or you have the crowds, like with Weegee’s images, where he would direct the people. I knew these pictures and I thought it would be a good idea to try something different. So I put the tripod in the water and shot towards the land. From then, I realized I had an idea, and the year after, in 1995, I started doing it seriously.

People don’t really look at me at the beach because my set-up is so big that nobody really cares. I am a little out of the normal line of sight of the people. Usually I get there early in the morning, so when people arrive I am a fixture, like a pier or something.

The beach is a perfect place to study the human being. People are more apt to be studied there – they have less clothes and they don’t have anything to do, really. They don’t rush around too much. But they occupy a space; they take some of their belongings and there is a primitive thing. People behave in a way that reflects a lot about what we are, what we do, and what we think. If you go to a square to photograph, where there are also hundreds of people doing things, they are not really sitting; they are all moving and you can stay for days and never get a situation that you like, and there will always tend to be 50 per cent or more of the people turned the other way. From both the technical and the sociological point of view, the beach is an easy way to study people.

On a beach, they stay there all day and somehow reproduce what they would do at home. It will be open – anybody interested can peep into their lives. You mix the sociological, historical and artistic parts. Little events explain more about how we are than some of the big events that we often focus on. Our lives are made up of minute stories that happen every day. And those you see on the beach.

I may make ten to twenty images in a day. In fifteen years of this I have done 3500 negatives altogether, including the double-exposures and the things I can never use. Out of these I have maybe over 100 pictures. I will use perhaps one out of every twenty or thirty. The ratio is higher when I do a job than when I do my personal work. Most of the work is about planning. Then reality always goes beyond my thoughts. Every summer I might do two or three trips that last up to two weeks. And I do ten or fifteen pictures every trip. The places I find on the way are always better than I planned.

My picture-making – the point of view and so on – is all established before I photograph. I take one shot, really, and repeat it. I don’t move the camera once I have set up. There may be nothing there at first, but I know after two or three hours something will happen.

I am always careful not to let the geographic part become too important. The cultural difference is possible, but I always try to get something very bland in a way. I could photograph a gay beach, or a nudist beach, but then I would be taking a stand, a position, and I don’t want to do that. If I do a normal beach it doesn’t imply anything in that way, but allows people to observe the little stories of our lives. I want the viewer to mind the smaller things, minute details.

My pictures are very simple, very stiff – they don’t bend. Sometimes they have a perspective, but you could turn the camera ten degrees to the right or the left and nothing really changes. They are not framed or composed like one would expect that a good picture should be composed. In a way, they are not so accomplished.

It is not a snap, but it could look to somebody who does not know a lot a little like a postcard. But then when you go into it you understand what is behind it and that you want to take time and look at things – see the groups, the individuals, the landscape. But at the beginning it looks very simple, a shot of something not very interesting. But you discover by yourself; there is an effort to be made by the viewer.

It is very important how people see it, the scale of it. Normally my pictures are produced 180 by 220 centimetres – it makes a huge difference. They need to be seen in that scale, because at that scale you can see the details and get into the picture. At that scale I see people go near the picture and look at this and then at that, then go back and look at it in the entirety. They do what I want them to do, the in-and-out movement. Then they see somebody looking at somebody else in the picture, and they follow things: a little path of colour, all the reds or yellows, all the shapes or other little things you might not expect to see. Each one spends some time and can appreciate it over time.

I do the prints a bit light. That little lightness makes them a little odd, gives people a little more interest. If they were super-normal prints, people would not look at them too long. But the light somehow helps attract, and so people get into the pictures and start behaving in the way I want.

Digital cameras are getting better, and I would like to use them. It is not there yet. One cannot pretend to do with a digital what I do with an eight-by-ten. With digital I would have to find a different type of picture-taking, as every camera makes the type of picture it makes. The camera you use makes that type of picture and only that type.

Being seen as fine art gives the images enough distance for them to be thought about in a more relaxed way, where people will take more time than with a magazine or even a book. People value the image more. It is a question of luck, really, because when I started to do these pictures in big sizes, around ’97 or ’98, contemporary art was looking for something big and cheaper than paintings. You can make up a lot of theory, but it comes down to these bare facts – economics.

I think the fact that everybody is taking pictures today is interesting and not a problem for me. People can take their pictures, but when they see one of mine they realize it is different to theirs – and they are not going to take a picture like it easily.